Topics: Designing your own algorithm. Programming in something that vaguely resembles symbolic machine language.

What Will I Do? Program. Compete, if you want.

Points Available: No official O1 points. (For most O1 students, this chapter is completely optional. However, if you are taking Programming Studio 1 in parallel with O1, do note that these assignments are an official part of that course.) 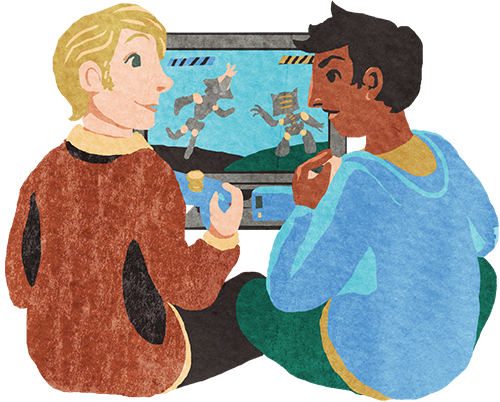 That is, the settings are the same that you get by selecting Tribal → Basic Duel in the app’s GUI.

Once the Bunnies are no match for your tribe, and you can almost hold your own against the Tigers, too, it’s time to take your tribe to the next arena.

Every fifteen minutes, RoboSpeak.fi makes the tribes that y’all have sent fight each other and calculates a new rating for each tribe. That number is based on the results of the previous matches; it resebles the Elo ratings of chess.

You can resubmit to update your tribe as you come up with improved strategies.

You can send your tribe to a practice battle by going to https://robospeak.fi and creating an account there. (For that, you need to provide an email address. The site uses that address only for activating your account, and does not store it anywhere. The user name that you pick will not be visible to other students, and the same goes for the RoboSpeak code that you submit.)

Please note that RoboSpeak.fi is for practice only. The official tournament will take place after the deadline, and will be run by our sister course Programming Studio 1. To take part in the tournament, you must submit the participating tribe via the form below.

Submitting your solution to participate in the tournament

The robot tournament’s results will be published soon after the Week 12 deadline by the course Programming Studio 1. We’ll also put a link to the results in O1’s final bulletin in Chapter 13.0.