Questions Answered: What higher-order methods do Strings have? Can I write an algorithm that operates on strings? My friend claims to be good at Hangman; how can I teach them a lesson?

What Will I Do? Program, once you work out what the program is supposed to do. A single programming assignment makes up most of this chapter.

Rough Estimate of Workload:? Five hours? You don’t need to write a great amount of code, but it will take time to get to know the program’s domain, come up with a solution, translate the solution into code, and test the program. Don’t get stuck; ask for help. 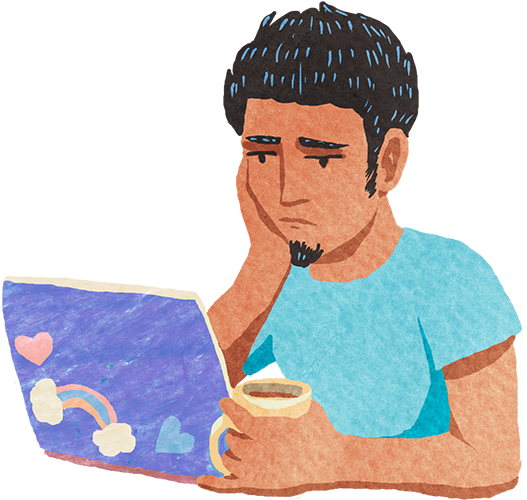 The facts listed below should be already familiar. Revisit the earlier chapters or the Scala Reference for details as needed.

Now, knowing that Strings are collections, it’s natural that they too have higher-order methods, many of which you already know.

Examples of higher-order methods on Strings

Let’s use foreach to print each of a string’s elements (characters):

Now let’s take a longer string and filter out everything but lower-case letters. We’ll be assisted by the isLower method on Chars:

sorted sorts characters as per their natural ordering (Chapter 9.2), which is defined by Unicode:

Note that in Unicode, the upper-case alphabet comes before the lower-case one.

With sortBy, we can — for instance — sort the letters by their lower-case equivalents:

Calling toLower on a Char produces its lower-case version.
Observe the difference between this output and the earlier one.

The map method constructs its return value by applying its parameter function to each character in the string. Here are a couple of examples:

Background: the game of Hangman 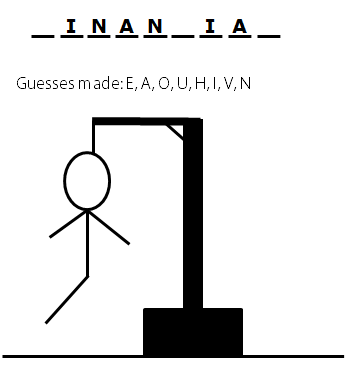 A, I, and N have been correctly guessed. Five guesses have missed the mark, so the riddler has drawn a stick figure with 1) a head, 2) a body, 3, 4) two arms, and 5) a leg. The next incorrect guess means the second leg is drawn and the guesser loses.

Hangman is a classic word game for two: one player — the riddler — picks a word and the other player — the guesser — tries to figure out what the word is, guessing one letter at a time. The length of the word is known to both players. Each time the guesser picks a letter, the riddler must reveal all those positions in the target word where that letter appears. If the letter doesn’t appear in the target word at all, the guess is a miss and the riddler draws an additional element into a line drawing of a hanging stick figure.

If the guesser misses a few times, the drawing will be completed and the guesser loses the game. The guesser wins in case they manage to reveal the entire word.

That’s pretty much all there is to it, but you can read up on the game in Wikipedia if you like.

There are many digital variants of Hangman in which the computer takes the role of the riddler and the human player is the guesser. Just like the traditional pen-and-paper version, these variants are based on the premise that the guesser can trust the riddler.

Our take on Hangman is different. In the game we’re about to program, the riddler is something called Peeveli, and it doesn’t play fair.

In a regular game of Hangman, the riddler picks the target word at the start of the game and scrupulously reveals letters as the correct answers accumulate. But what if the riddler wasn’t trustworthy?

Imagine the scene. The game has just started, you are the guesser, and the riddler has just — unbeknownst to you — picked the target word BAZAAR. The concealed word initially looks like this:

If you now guess A, the riddler should reveal three copies of that letter. But they could instead mentally switch their original target word for an A-less one — BELIEF is an example — and inform you that there is no A and your guess is a miss.

Imagine another scene. You’ve managed to guess all but one of the letters in this five-letter word, but the next incorrect guess with lose you the game.

Suppose you haven’t guessed the letters B and O yet. There are only two possible answers: BASIS and OASIS. However, if you pick B, the riddler can claim they were thinking of OASIS — and vice versa. You can’t beat the dishonest riddler!

“Peeveli” is an archaic Finnish word for the Devil. It derives from the Old Swedish “böfvel”, which additionally meant a hangman. These days, the Finnish word is comparatively rare and is employed almost exclusively as a semi-humorous exclamation or very mild curse. The name of our game thus captures the diabolical nature of our virtual gallows expert as well as, perhaps, the reaction of the exasperated guesser.

In the game of Peeveli, the computer is the riddler and the human player is the guesser. The game is challenging because the computer cheats methodically. It uses a vast vocabulary in combination with a devious algorithm: it doesn’t actually pick a target word at all, instead keeping track of all the existing words that continue to be plausible correct solutions, given the previous guesses and the letters already revealed as a consequence. Whenever the player guesses a letter, Peeveli tries to keep its options open: it selects which (if any) letters to reveal so that there are as many potential solutions left as possible.

Imagine a scenario with you as the riddler. The target word is supposed to have four letters. Further imagine that there are no four-letter words in English apart from the ten listed below. The target word must therefore be one of those ten.

Your opponent’s first guess is the letter A. What should you do?

First, you should see where the A’s appear in the list of known four-letter words.

Now you can identify a few groups of words with different patterns of A’s in them:

This basically means that you need to pick one of six alternatives. A good basic strategy is to pick the largest group, which in this instance is the last one. So you inform your opponent that the word has no A’s and memorize the fact that there are three plausible solutions left: GURU, JUJU, and ZERO.

If the vocabulary had additionally contained APEX and ARMY, which begin with an A, the group A___ would have been the largest. In that scenario, you would have revealed the initial A and memorized the plausible solutions ALSO, APEX, ARMY, and AUNT.

The art of deception

In this chapter, we’ll always use the basic strategy of picking the largest group. If you wish, you can reflect on why that isn’t always optimal and how you might come up with even craftier algorithms.

Suppose you’ve chosen the group with GURU, JUJU, and ZERO, and your opponent’s next guess is the letter U. This results in the groups _U_U (with GURU and JUJU) and ____ (with ZERO). The former is larger, so you tell your opponent there are U’s in the second and fourth slots.

Whenever your opponent guesses a letter that doesn’t appear in any of the plausible solutions, you have only a single group that encompasses all the words that remain. Obviously, you’ll then pick that group.

Occasionally, you’ll find that there are multiple groups of equal size. In such cases, you could pick an arbitrary group or break the tie by choosing the group that reveals the fewest letters. 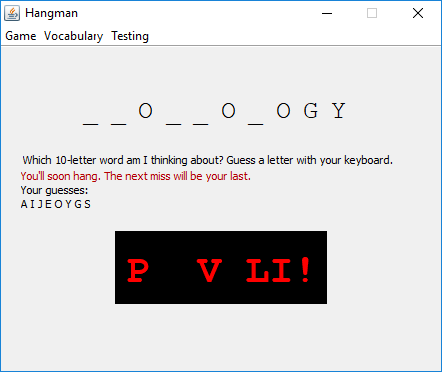 The Peeveli game doesn’t draw a hanging figure; it tallies missed guesses by displaying letters in red. The letters start appearing when the player has only a small number of incorrect guesses left.

The project Peeveli contains a partial implementation of the game described above. The GUI is in working order but the riddler is sorely lacking in smarts.

In the above description of Peeveli’s algorithm, we mentioned that when word groups are equal in size, it might be a good idea to pick the group that reveals fewer letters to the guesser. That is completely optional in this assignment. Implement that additional bit of devilry only if you want an additional challenge. Otherwise, just pick any of the equally sized groups.

In the Finnish edition of this ebook, there is an optional assignment here that involves the Finnish language. This assignment is unfortunately not available in English. Sorry.

Peeveli is a derivative of a similar programming assignment designed by Keith Schwarz.